At Kitty Bungalow Charm School for Wayward Cats in Los Angeles, where I volunteer, we take our responsibilities to our "students" seriously. That means not only getting them off the street, cleaned up, healthy, and spayed or neutered, but teaching them all about how to be the very best, most companionable lap cats they can possibly be.

But all that hard work can't pay off until these felines find homes of their own, so that's why I recently signed up to be a "school councilor." That means that I'll be posting photos and networking deserving cats who are ready to graduate into loving families.

So, here's Valentina! Even though she was born in a rich neighborhood, her mom was feral and she had a bit of a rough start. It took a little while for her to learn that people are okay, but now she loves them. Other cats are pretty okay in her book too. I don't know about dogs, but chances are, she'd be just a relaxed around them as she is around everybody else. You say you'd like more photos? You're in luck!

If you happen to be looking for a feline companion, you really can't go wrong with this sweet girl. If you'd like to meet her you can pop a note to kittybungalow@gmail.com . And if you happen to end up adopting her, please let me know. I'll send you a welcome basket of handmade cat toys! After all, I want to make sure that the first student I "counsel" gets started right in life!

Even after visiting Santa Fe many, many times I always find new things. Who knew there were ancient petroglyphs just a short drive and hike out of town? I mean, yeah, that hike does involve a very steep, rocky climb, but it's well worth it. Just look what you discover at the La Cieneguilla Petroglyph Site! Apparently these were made between the 13th and the 17th centuries, so some of them date from before contact with the Spanish. They are sort of above a river, marking out what was once a trail along a mesa, but I don't think anyone knows what they mean. They are definitely cool to see though! 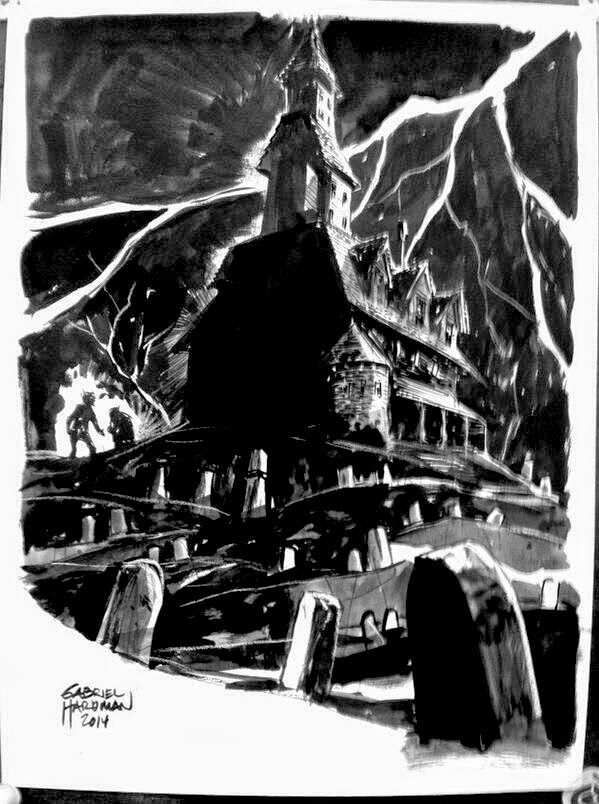 Just one month from now my co-creator/husband Gabriel Hardman and I will be in New York for Special Edition: NYC.  Like NYCC it's being held at the Javits Center, but will be much more comics-focused. We'll be there June 14th and 15th.

The next weekend we're heading down to Charlotte, NC for HeroesCon, where we'll be holding down a table in Artist Alley from the 20th to the 22.

We'll have books, art, and prints, but if you'd like to get a sketch from Gabriel get on his list soon! You can get all the details here.

He's also continuing his Convention Portrait Project. He's already done portraits at Emerald City and WonderCon but these will be his first from the East Coast. You can find out more about that here.

Hope to see you at a con this summer! We've got a couple more coming up in the fall, but until then, see you back east!
Posted by TheFrogBag at 4:02 PM 3 comments:

Rainforest of the Americas

Hooray! The last piece to Phase I of the LA Zoo's Master Plan is finally complete. The new (and lovely) Rainforest of the Americas is now open to the public. I still remember the first part of the puzzle, the Chimpanzees of Mahale Mountains, opening in 1998. I was employed by the zoo at the time, working in the Behavioral Research Division, studying how the chimps could best make use of their new space. That was the zoo's first step into a new century of exhibit technology. I sincerely hope this new space won't be the last, despite the City of LA's steadily declining support. But for now, let's celebrate the new space, and what it can mean for the conservation of its rare denizens in the wild! 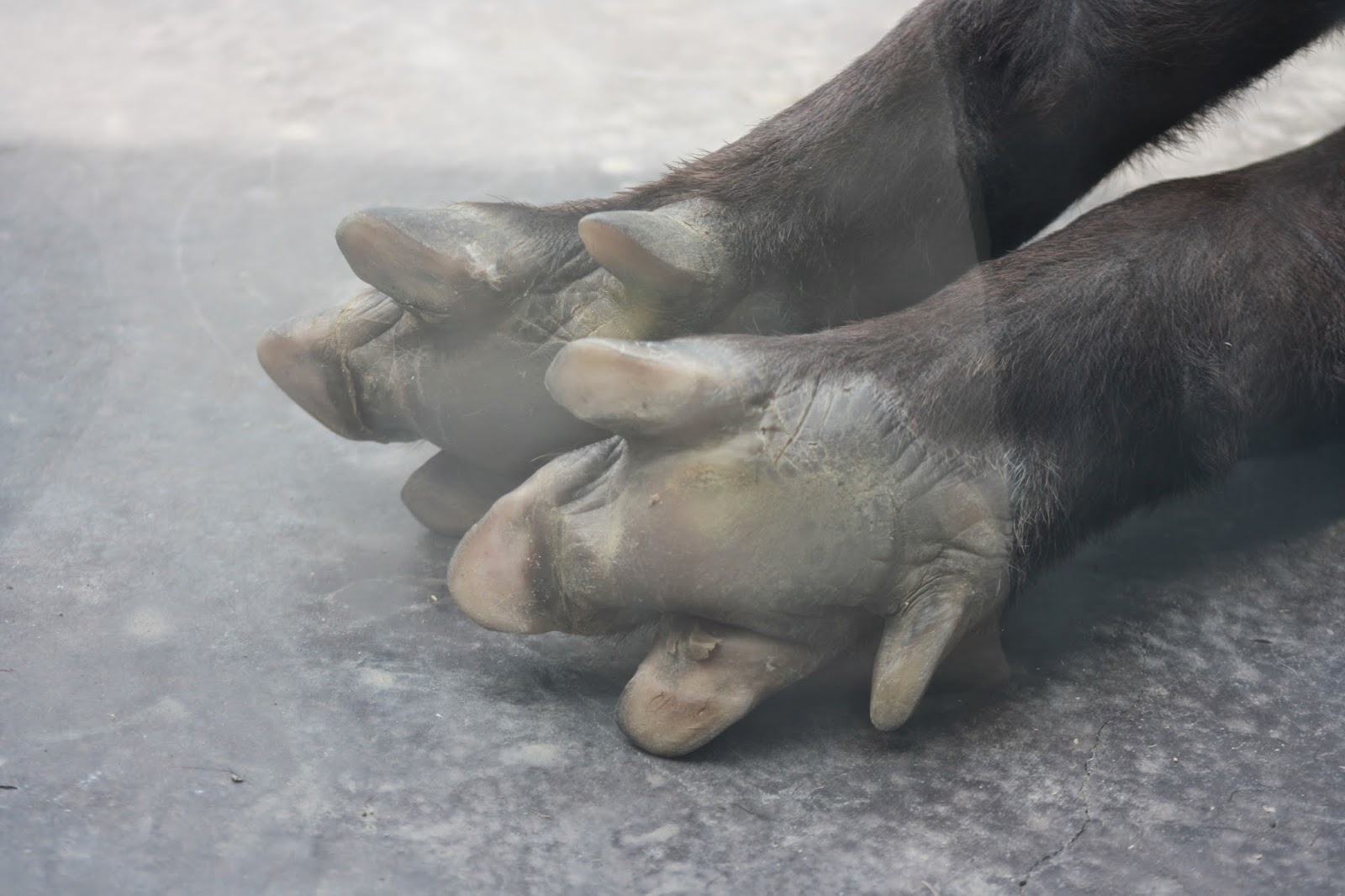 It's almost the end of April which means Con Season is in full swing. Gabriel and I just attended Wondercon this weekend and are preparing for several more over the summer. Of course we'll have books and art, but Gabriel's doing something new this year: The Convention Portrait Project. Here's the deal, as stated on his blog:

"If you're willing to sit for 20-30 minutes, I'll draw a naturalistic portrait of you in my convention sketchbook. I won't be selling these sketches (or giving them away for that matter), they're staying in my sketchbook. I'll happily send you a scan if you give me your contact information.

These are naturalistic drawings, not charactertures. Cosplayers are welcome but be aware, these drawing will not be idealized superhero style sketches.
If I end up with enough interesting convention portraits, I may collect them in a book at some future date.
So please, If you'd like to take a break from the con and can sit still for 30 minutes, come by our table and ask about the CONVENTION PORTRAIT PROJECT. " 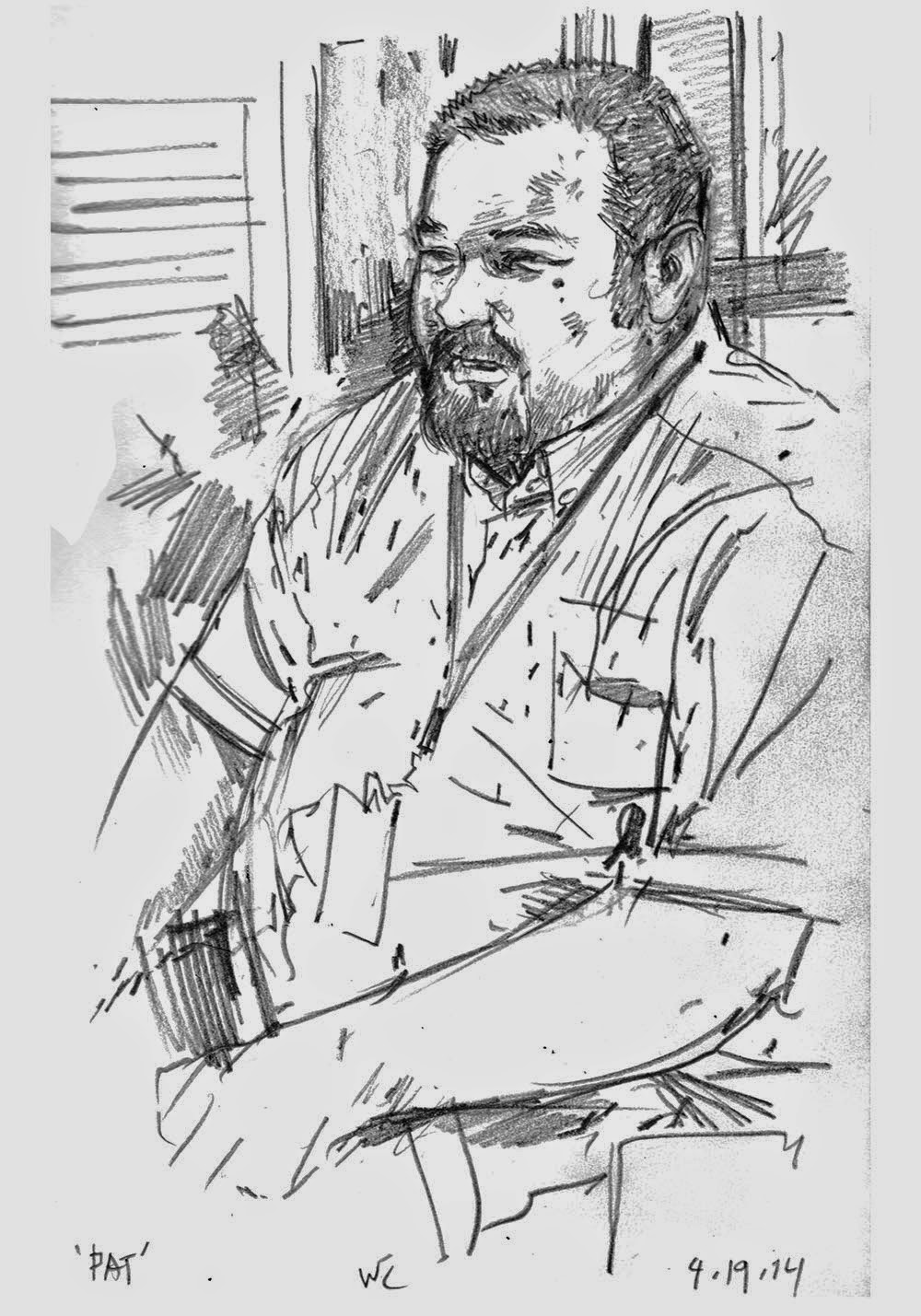 If you'd like to participate, stay tuned! We have at least three more cons coming up, so lots more portraits will be drawn.

In other news, how about some new trades? First up is the final volume of our Planet of the Apes: Cataclysm run. I'm really proud of how this third book turned out, and I'm thrilled that it can now sit on the shelf with the other two volumes as well as the two miniseries which came before it. If you'd like to check it  out, here's the Goodreads listing. And if you'd like to order it, here's a link to Amazon. 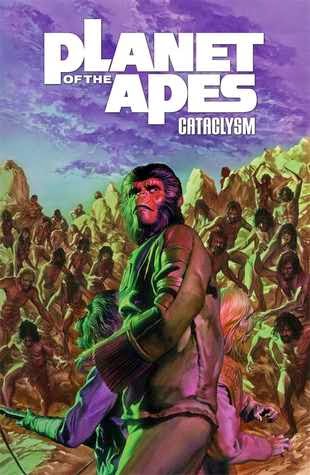 Meanwhile, in a completely different fictional universe, our run on Star Wars: Legacy continues with issue #14 appearing this week. But if trades appeal to you more than floppies, you're in luck here too. Volume two, Outcasts of the Broken Ring, is set to appear in a little over a month. You can preorder it already on Amazon, and it's even on sale right now. 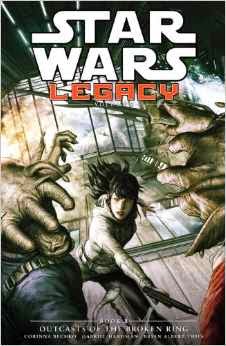 And if that's not enough sci-fi for you, then we also have a new miniseries appearing July 30 from Dark Horse. Scripted by Gabriel and me from a story by Mike Richardson, Deep Gravity will run for four issues and includes plenty of exo-biology and deep-space-faring vessel action. Not to mention several characters that I'm quite fond of. 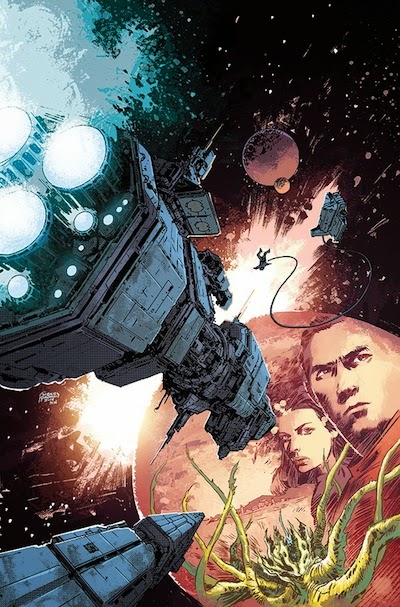 So that's the update. Hope to see you at a con this summer!

Kitten of the Week - Magritte 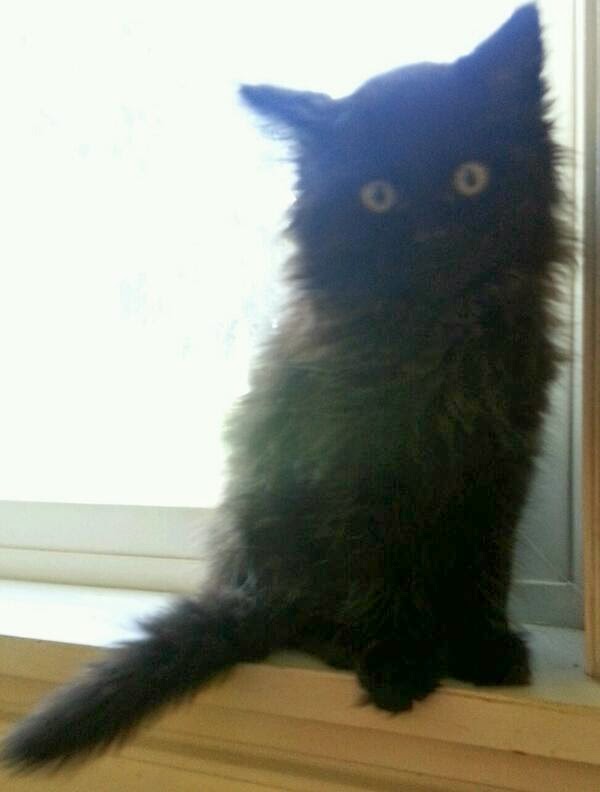 Margritte is the funniest kid I've seen in a long time, and I see a lot of feline kids. 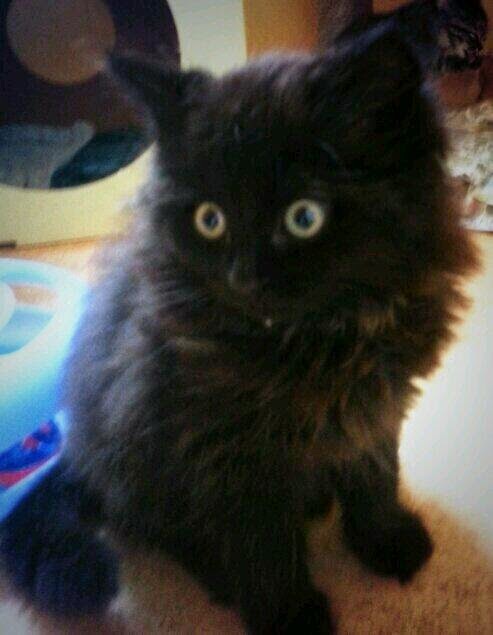 He'd like a home of his own though, so if you want an entertaining friend contact Kitty Bungalow Charm School for Wayward Cats.

Posted by TheFrogBag at 7:08 PM No comments:

We're back from Emerald City Comicon and you won't be surprised to hear that it was a terrific show. I love having the chance to spend some time in Seattle. And the show itself is so smoothly run that it's an absolute joy to start off "con season" there. As is always the case, the weekend went by in a blur, but fortunately I took a few photos of the highlights.

On Saturday I sat on a panel hosted by Janelle Asselin that captured her column "Hire This Woman" live. It was the first time I'd met Amy Chu, Heather Nuhfer, or Robin Robinson. Mairghread Scott is a SoCal writer like me, so it was nice that we were seated next to each other, representing the fact that all comics don't happen in Portland or the east coast. It was a real honor to share the stage with such talented women, so a big thank you is in order to Janelle for inviting me. If you'd like to see my print interview, you can find that here.

Throughout the weekend Gabriel continued his Convention Portrait Project, drawing con-goers, pros, friends, and fans. You can see all of them here, and read a bit about it here. We're currently planning other cons, so if you want to be the subject for one of his drawings, stay tuned and get in touch.

I didn't get as much time as I would have liked to walk around and see the rest of the con, but happily Drew Rausch, Jocelyn Gageway, and Aaron Alexovich had a table right around the corner from ours. If you don't already know about it, you should check out Drew and Jocelyn's terrific webcomic My Blacks Don't Match. It's even free! I also got a peek at Aaron's Serenity Rose: 10 Awkward Years, and man does it look gorgeous! I can't wait to get my copy. It's one of the nicest things I've ever seen emerge from a Kickstarter.

Apparently the Pacific northwest is good for more than comics... Great hats can be found there too. Mike Norton had a table down the row from us and at some point during the weekend he bought a hat. A terrific hat, a hat that looks good on everyone. To test out the terrificness of the hat he took many pictures of many people in the hat. Sure enough, everyone looked great. You can see more of those here.

As Sunday wound down Gabriel and I were gifted with this swell poster as a thank you for creating a little chunk of the Star Wars universe. I was so touched! Sometimes when you work at home you forget that anyone will ever read what you've written. Getting this delivered to our table just about made my day.

So after that whirlwind we are back home and back to work, because one more thing happened at ECCC. Our latest work-for-hire project with Dark Horse was announced: Deep Gravity! It's being scripted by Gabriel and me from a story by Mike Richardson, with art by Fernando Baldo. Look for it later this summer.

TheFrogBag
Los Angeles, CA, United States
A writer of comics (Heathentown, Planet of the Apes, Star Wars Legacy) and prose who can't shake her zoology background. Home wouldn't be home without four cats, a dog, two birds, and a brilliant illustrator. Be prepared for a lot of talk about conservation, tapirs, comics, frogs, beads, coffee, and time travel.

Where to Find My Words

Betrayal of the Planet of the Apes

Exile on the Planet of the Apes